The Whites will take on Arsenal at Landover's FedExField (Maryland) in their second outing of the tour.

The Real Madrid squad have now arrived in Washington, the side's third stop-off on this 2019 pre-season trip. After the meeting with Bayern Munich, the Whites' travelling party, led by club president Florentino Pérez, left Houston airport and set out for the US capital. After landing, the team transferred to the Mandarin Oriental hotel, where the madridistas will be based during their time in Washington.

The team are set to play their second game of pre-season at Landover's FedExField, the same setting where they took on Juventus last year. Zinedine Zidane's men will pit their wits against Arsenal on Tuesday night into Wednesday morning (1am CET; Tuesday 7pm local time; Realmadrid TV). 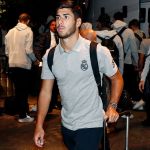