"We are happy because we welcome one of the great defenses in world football", said Florentino Pérez.
Eder Militão was presented as a new Real Madrid player in the presidential box at the Santiago Bernabéu. The defender has signed with the club until June 30, 2025. After projecting a video with the best images of the player, President Florentino Pérez spoke: "We are happy because we welcome one of the best defenses in world football. A man who has just won the Copa América with his national team. You arrive at Real Madrid at only 21 years old, being champion of America and coming from a big club in Oporto".

Challenges
"Now you will face the biggest challenge of your entire professional career. You arrive at Real Madrid because you have chosen this club ahead of all the big clubs that wanted to have you amongst their ranks. Here you will demonstrate everything you have shown. Your courage and your love for this badge will help you succeed. And our supporters from all over the world will also help you".

"Very soon you will see what it means to wear this jersey and defend this badge. And doing it in this Santiago Bernabéu stadium will be one of the most special emotions you will experience in your life. The moment you've been waiting for has arrived. You are a Real Madrid player. This is now your home and never forget that the values ​​of Real Madrid will accompany you on this road to victory".

"Today is a very important day for us because we present one of those great players who will help us achieve the challenges we have set for ourselves. We have a great squad, we have a fantastic group of players that also has new talent who want to succeed at Real Madrid. All together, from unity and solidarity, we will achieve big victories, as it has always been up until now".

New project
"We have started a new path full of hope for the millions of madridistas who live for Real Madrid. The first team with Zidane at the helm is already preparing for this new season, we want to rediscover those winning feelings that our fans want so much. Because our goal is to win and always be up with the best in our history".

Big challenges
"Here you believe in the impossible. This is how we have managed to be one of the big references in football. And for that we are working to set up a team capable of facing the big challenges that we have to face today".

Signing the contract
Before posing in the presidential box, Éder Militão signed his new contract in the boardroom of the stadium accompanied by Florentino Pérez. After the signing, the defender received a watch, a replica of the Santiago Bernabéu and a jersey with his name on. 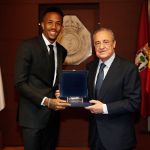