Florentino Pérez: “Going to this school sets you up as a professional and human being”
“Today you are reaping the benefits of your work and your persistence. Our school looks to give you the key tools you need to make your dreams come true but I hope that, after all this time, you will also take with you the essence of Real Madrid's values. I am certain that the Real Madrid University School-European University will set you up as a professional and human being”.

"Real Madrid's success is down to those people who have worn this shirt and given everything for it. They also believed in the mantra that will accompany you from here on in: we will never give up, here the words impossible and complacency do not exist. That is how we have built this legend that is Real Madrid. You will have the Real Madrid DNA within you forever”.

Prestige
“You have started an emotional link with the club that will last forever. We have had over 11 500 students here at the Real Madrid University School and the schools across 10 countries. We have seen 1065 students go through our halls this year, 512 in Madrid and 553 around the world. Our school has attained a level of prestige beyond our own Spanish borders, we have been recognised this year with the National Sports Prize for our special contribution to the promotion and fostering of sports”.

“Allow me to take this opportunity to give special thanks to the sponsor of this thirteenth promotion of students. He is a top-level sponsor who heads up an outstanding company. This sponsor is transforming a historic company into a market leader in the technologies that are so key in the 21st century. The best executives among us know that future that is already upon us. It is an honour for all of us to have José María Álvarez-Pallete, executive president of Telefónica, here with us”.

Butragueño: “Our school is a solid, successful project”
“I want to congratulate all our students. It's a day that must make you feel such pride. An essential feature of Real Madrid is the ability to start new paths and the key to our identity is our international mind-set. Our school is a solid, successful project. The school has become a reference in the education world. This club has so dear to me throughout my life and has shown me the value of trusting yourself, being part of a team and never giving up on your goals. This club never gives up and we ask the same of you”.

José María Álvarez-Pallete: “You are graduating from the most accomplished school”
“This is the most exciting moment in my life so far, standing on the Bernabéu pitch, the pitch of the best stadium in the world and speaking in front of thousands of people after being introduced by the president of the best team on the planet. I want to share these three words with you: desire, accomplishment and greatness. There is a one in 130 million chance of winning four of the last five Champions Leagues and one in 5000 billion to win it 13 times. All across the world, Real Madrid is the only club to have achieved something like this. How can a football club do something that is so clearly impossible? It is all down to not knowing what impossible means and simply believing that you can do it. That is how great things are accomplished and you are graduating from the most accomplished school”.

Most valued programmes
Throughout the act there were special mentions for the most valuable Masters programmes, including the University Master in Communication and Sports Journalism and the Master in Football management. Javier Vidaurreta and Antonio Galeano, the first-year directors, and David Viejo and Miguel Pardeza, second-year directors, also received special mentions. 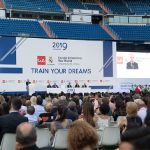