The Real Madrid president posed for photographs with fans at the Equinox Hotel.
Florentino Pérez has hosted the New York City Madridista Supporters' Club at the Equinox Hotel in New York. The Real Madrid president greeted fans and posed for photos with them and gave the club a Whites jersey. The event was also attended by Director of Institutional Relations, Emilio Butragueño. The members of the supporters' club were thrilled to have their idols in the city ahead of the derby with Atlético, set to take place on Friday night into Saturday morning (02:00 Spanish time; Friday 20:00 local time) at the MetLife Stadium in East Rutherford. 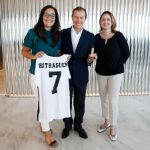