The Real Madrid skipper converted from the spot after Asensio earned the penalty in the meeting against Sweden, a game in which Isco and Carvajal also completed the full 90 minutes.

Sergio Ramos played an influential role in Spain's win over Sweden at the Santiago Bernabéu in the sides' European Championship qualifier. The Real Madric captain broke the deadlock in the 64th minute from the spot after Asensio had earned the penalty as La Roja recorded three points to retain their place at the top of Group F with a clean sweep of wins. Carvajal and Isco played the whole game, as did Ramos, whilst Asensio featured for 65 minutes.Prior to kick-off, a minute's silence was held in memory of José Antonio Reyes and Lennart Johansson and Ramos received a tribute for his record number of wins with the national team.

The fixture was the 46th match played by La Roja at Real Madrid's stadium, which is the arena to have hosted the most national team matches, followed by Mestalla (32) and the Sánchez-Pizjuán (25).

Stadium to have hosted the most wins
The team's record in these 46 outings is 29 wins, nine draws and eight defeats, with 101 goals for and 48 against. This tally of wins makes the Santiago Bernabéu the stadium to have witnessed the most wins for the Spanish national team.


This encounter marked the second time that Spain and Sweden have locked horns at the Santiago Bernabéu. The teams' first meeting was back on 17 November 2017 in a European Championship qualifier, in which Spain once again ran out 3-0 winners. Ramos was also on target on that occasion, finding the net in exactly the same minute as he broke the deadlock tonight.

24 different countries have visited
Portugal was the first team that faced Spain at the Santiago Bernabéu. It was on March 21 1948 in an international friendly (2-0). The most recent Spain game to have been played at the stadium was against Italy, in a qualifying match for the World Cup. It was played on September 2, 2017 and finished 3-0 for the La Roja, with Isco bagging a brace. 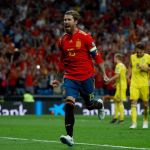