It was a fine team performance from the Whites, with 10 players hitting PIR double digits as they made it 1-0 in the quarter-final tie.
WiZink Center

75
Real Madrid got their League play-off tie off to a winning start this evening with an impressive performance against Baxi Manresa to take the first point in the quarter-finals. Laso's men put themselves in the driving seat in the first quarter, romping to 29-15, before maintaining their advantage with a superb team display as 10 players got into double digits on PIR, led by Campazzo and Ayón (17 each). Randolph was the Whites' leading scorer with 15 points and Causeur continued his sublime run of form with 10 points in 13 minutes. The next clash at the Nou Congost is set for 72 hours' time.

As the Under-16s presented their Spanish championship trophy to the fans, alongside Tavares and Campazzo showing off their awards for having been picked in the 'Best Five', Real Madrid wasted no time in stamping their authority on the game. Manresa lasted for five minutes at 6-5 before the Whites took the same amount of time to rip them apart. Tavares presence in the paint (7 points and 4 rebounds), Campazzo directing proceedings (3 assists and 3 steals) and Randolph clinical around the hoop (11 in the first quarter) were the difference for the Whites, who smashed an 11-0 run to finish the first 10 minutes on 29 points (29-15).

Madrid stay solid
Without two of their best shooters (Toolson and Fisher), Manresa were relying on their relentless energy to stay in the game, surviving on Lalanne and Zubcic's fine efforts and the offensive rebound in the second quarter. They got back to within eight points in the 14th minute, but Laso's side picked up their rhythm once again. On a strong defensive foundation, they forced four turnovers and retained a comfortable lead with Carroll, Ayón and Deck scoring 22 of the team's 24 points in the second period (53-37, min. 20).

Real Madrid continued their absolute dominance of the game following the break, yet failed to completely put it to bed. Much of the credit for that has to go to Manresa, who looked more incisive with nothing to lose. Laso then changed things around in an attempt to quell the visitors' response and Causeur did just that with another astonishing spell: 10 points in 10 minutes in his first moments on court. The madridista squad was proving too much for their opposition, with Reyes and Thompkins coming together in offense to finish off the third quarter 20 up after a triple by the captain (78-58).

Eleventh consecutive win
The Whites made sure of yet another win as they continue to look unplayable in the league. Despite the efforts of the great Lalanne, Real Madrid didn't let their intensity drop in the final quarter thanks largely to their deep squad, this time Llull and Ayón doing their bit. The deficit was 23 by the end at 98-75, everyone getting in on the action, with five players scoring over 10 points. 1-0 and now on the road to Manresa to clinch a semi-final spot. 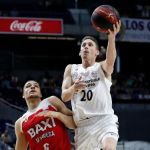