They won against Coruxo thanks to a Cristo brace and a goal from Javi Sánchez to remain in playoff contention for another week.
Alfredo Di Stéfano

3
0
The Alfredo Di Stéfano saw Castilla take another step towards the playoffs. The madridista youth team beat Coruxo with two games to go thanks to a goal from captain Javi Sánchez, from the penalty spot, and a Cristo brace, taking his tally to 18 goals. In a game that showed the calibre of Segunda División B Group I, the Whites remain in the playoff spots.

Coruxo took the initiative in the first fifteen minutes and rattled a shot into the side netting of Luca's goal. From then on, Castilla turned up the pressure and started to get more possession, at times really stretching play down the wings. Cristo fired a warning shot on the half hour mark, with a header that ricocheted off the post. Just after there was a moment of real individual skill from Dani Gómez which ended up with a penalty that Javi Sánchez fired in to make it 1-0.

Best minutes
Coruxo had some good chances thanks to two free-kicks before the break, but after the break it was Castilla who struck again. Fran García ran down the left to pass back to Cristo who scored a left-footed shot (59’). From then the youth team played their best minutes and both De Frutos and Fidalgo, had great chances. Coruxo kept on attacking. They fired in some terrific crosses, but Luca proved his mettle time and again. On 88’, Cristo netted from outside the area to put Castilla a little closer to their aims for the season. 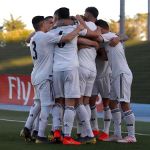