During his time at Real Madrid, he lifted two UEFA Cups, five LaLiga titles, two Copas del Rey and a League Cup.
Today marks the 27th anniversary of the passing of one of the most iconic names in Real Madrid's history: Juan Gómez Juanito. On 2 April 1992, the legendary player lost his life in a car accident as he was returning to Mérida after attending a match between Madrid and Torino at the Santiago Bernabéu. He was 37 years old at the time and was the manager of Mérida.

Juanito was born on 10 November 1954 in Fuengirola (Málaga) and wrote his name into the Real Madrid history books during his spell at the club, which began in 1977 and ended in 1987. He racked up 401 competitive appearances for the club, scoring 121 times and lifting two UEFA Cups, five LaLiga titles, two Copas del Rey, a League Cup and a Pichichi Trophy.

Memories
Twenty-seven years after his passing, he is remembered in the seventh minute of every home game when the chant of "Illa, illa, illa, Juanito maravilla" rings around the stadium. As well as oozing quality and being a determined battler out on the pitch, Juanito was at the centre of some unfogettable images in madridista folklore, like the photo that captures him jumping for joy in the UEFA Cup comeback win over Borussia Mönchengladbach in the 1985/86 season. 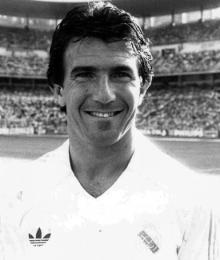