"This Santiago Bernabéu stadium is an example of the universality of football. It is a territory of emotions and feelings that unites millions of people beyond their origins, their languages, their religions or their social conditions. It unites millions of people without any distinctions. At Real Madrid we try to make football a place where young people from all corners of the world observe a culture of work and where they are able to find an opportunity to be better every day".

Football as a school of life
"Football is today one of the great social phenomena that have contributed the most to globalization. A sport that has no borders and is also a school of life that helps improve many people, especially children around the world for whom football can also be an instrument of solidarity and education that serves to feed their hopes and dreams".

Gratitude
"I want to thank you for all the work you do to pay homage to the legendary figures who have starred in the most brilliant pages in the history of football. Some of them have marked the course of our club and have received your recognition for their contribution to the greatness and universality of this sport. Among them our president Santiago Bernabéu, from whom we follow all his steps; our mythical Alfredo Di Stéfano; our president of honour, Paco Gento; and also Emilio Butragueño, our director of Institutional Relations". Subsequently, the president of Real Madrid was photographed on the pitch with the delegation. 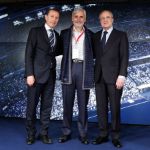