The Whites dominated almost the whole game and had to dig in against the Greeks' comeback in the final quarter, but three huge defensive plays clinched victory.
Wizink Center

72
A huge night at the Palacio, just as the fans have come to expect. The evening began with Luka Doncic out on court to receive a tribute from the captains prior to tip-off, and finished with the madridistas celebrating the first point of the play-off, beating Panathinaikos. The hosts were ahead throughout almost the entire forty minutes, though the Greeks did go six points up in the final quarter. It was a difficult, hard-fought clash in which Taylor and Causeur came to the fore. More of the same inside 48 hours.

The tie began with two minutes of misguided offensive efforts by both teams, before Taylor stepped up to change the dynamic with two superb triples in quick succession. The Swedish forward was the main man and would go on to hit 11 points before taking to the bench with 2 fouls. Tavares didn't find it easy up against Papagiannis, while Vougioukas was picking up the points for Panathinaikos (21-17).

Top advantage
The game was far from fluid and both teams struggled with the stop-start nature. Madrid were the dominant force but seemed unable to put together a run which would really turn the scores in their favour. Ayón was netting, as was Carroll and Thompkins, but points from Langford made sure they couldn't open up any significant gap. Two consecutive triples for the Greeks brought the scores to the minimum lead (32-31). At this crucial juncture, Laso brought on Causeur to ensure any potential problems would not materialise. The Frenchman was immediately involved, attacking Pitino's tall men, and six points for him saw the Whites surge in front once more. A Campazzo basket made it 43-35 at the break.

The restart was dominated by Taylor once more. Full of energy, the Swede stopped a Greek attack in its tracks, scored himself and laid on an assist before heading back to the bench for a third foul. The Whites appeared to have upped the concentration levels, with Causeur again controlling things in offense (6 points), and they moved to +14 (49-35) largely thanks to tremendous defending by Rudy, Campazzo and the Frenchman himself. Pitino's men were making too many turnovers but refused to lie down, and they came back into the clash with triples for Papapetrou and Thomas to get to just four behind, before two Prepelic free-throws made it six (58-52).

Time to dig in
Madrid headed into the final spell in front but a 0-13 run with nine points from Calathes, who had been quiet thus far, set alarm bells ringing for the hosts, as Panathinaikos went in front with 35 minutes gone (64-69). The European champions reacted with a Rudy triple, two Campazzo free-throws and another two for Carroll to make it 73-72 with 54 to go. To get there required a superb piece of defending against Calathes by Taylor and Tavares, before Campazzo replicated it on Langford. Madrid went three up (75-72) with another couple of free-throws by the Argentine but the Greeks had the final attack: Thomas missed his triple, Langford was on the rebound but came up against a Tavares block to send the crowd into delirium (75-72). 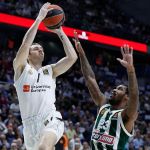