The fans showed their support for the European champions as they arrived at the Santiago Bernabéu ahead of their game against Ajax.
The squad once again felt the full passion of the madridista faithful upon the team's arrival at the Santiago Bernabéu ahead of the Champions League round of 16 second-leg clash against Ajax. After receiving the support of the club's academy players as they left Real Madrid City and embarking on the usual journey to the stadium, the European Cup-winning squad once again received a stunning reception from the hundreds of fans who descended on the Plaza de Los Sagrados Corazones, where the players received their final encouragement from the Madrid faithful, who showed their support for Santiago Solari's men with a series of chants. 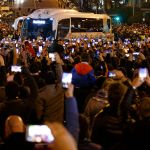