The teams are tied in second position in the league, and could meet in the semi-final in the Copa (7:30pm CET).
This is one of the best possible tests for Real Madrid in the Copa del Rey as this afternoon they host Baskonia at the WiZink Center, a rival who they could face next Saturday in the semi-finals and who are ranked second in the league along with the Whites. With +17 average points in favor, a win for Laso would be very great news for the Regular League final standings. Llull and Thompkins are still out, they didn’t travel to Moscow two days ago either. Prior to the game, Reyes will be honored as he has played the most gams in league history.

The last league final, the Supercup final this year, two of the best teams in the Euroleague ... What more can be said about this last game before the Copa break. The best offense, Real Madrid (89.2 points on average), against the best defense, Baskonia (71.7). This will be the fourth time the two have met this season and so far, it could not be more favourable for the Whites: The Super Cup (80-73), the Euroleague (97-79) and the League (74-91) were the previous results. Added to the two of the playoff finals last year in Vitoria it makes five wins in a row.

The Madridistas have gone nearly two and a half months unbeaten at the Palacio in all competitions. Since November 28th, they have won their nine games. On the other hand, Baskonia have won their last four in the league, including the away clash at Gran Canaria where they won by 18 points.

Real Madrid need to stay focussed this time, despite the fact that Shengelia and Granger are out, this team have several offensive players to turn to. Vildoza, Shields and Voigtmann are all doing well and the newcomer Jones has hit the ground running (13 points and 7.5 rebounds on average). With 57.5% accuracy, Perasovic's team are the strongest in terms of two-point shooting.

Campazzo-Tavares
The Real Madrid duo have been crucial in previous games against Baskonia this term. The guard averaged 11.3 points and a PIR of 15.6 while the center managed 9.3 and 16 in direct duals. As always, defense and rebounding will play a key role for Real Madrid if they want to play their best basketball. Rudy could today become the seventh best three-point scorer in the history of the league, following on from another Madridista: Louis Bullock (734). This will be a real showdown just before the Copa del Rey in six days’ time. 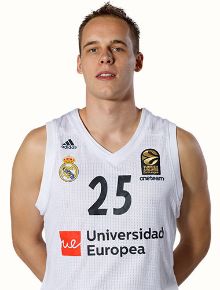