On the occasion of the 25th anniversary of the Cantabrian Sports Gala, the Sports Press Association of Cantabria has honoured the great personalities of the sport from this region, among which are six players who have worn the Real Madrid jersey. Along with Gento and Santillana, this list of historical athletes from Cantabria includes Marquitos, Amavisca, Miera and Helguera. These last two were also present at the event. 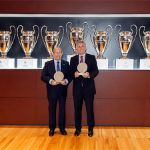