This is the fifth consecutive season in which Audi have held this agreement with Real Madrid. The German company were represented by Ignacio Gonzalez, head of Communication and External Relations, and Pepe Soler Roig, head of sponsorships, while the Whites were represented by Juan Carlos Sánchez Lázaro, director of basketball. 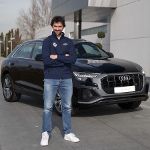