The event took place at the Infinia recording studio.
The first-team football squad have received their official cars, presented by Audi at an event which was held at the Infinia recording studio, with Solari and the full first-team squad in attendance. Players and coach each posed before climbing into their new vehicles. The sponsorship deal between Audi and Real Madrid began back in 2003. 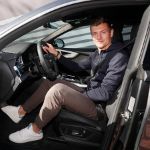