A block by Randolph on Tomic at the end of over time was considered illegal by the referees, leading to the winning basket for Barcelona.
WiZink Center

94
Real Madrid were unable to claim the Copa del Rey in a final that was decided in the last seconds of over time, with a block by Randolph on Tomic that the referees considered illegal seeing Barcelona get the winning basket. A spectacular Clasico in terms of the quality of basketball, with comebacks and with Llull forcing over time. Laso’s side didn’t get the win but gave everything in front of their fans. Ayón was the most outstanding player for the Whites with 12 points and 21 PIR.

As expected, the Clásico started with a lot of tension. Barcelona took the initiative thanks to their aggressive defense and with Claver and Tomic punishing the Whites’ basket (12 points between both). That allowed them to go seven points ahead at 7-14 in the 5th minute against a Real Madrid that was not comfortable in attack missing the three-pointers they had hit on their way to the final (1/5). Campazzo (5 points) and the appearance of  Randolph in the final part of the first quarter (another five) improved the situation for the Whites (16-20, min 10).

Llull pushes Madrid forward
The guard took a leading role and pushed his team forward at the WiZink Center bringing character, passion and quality to the table. Real Madrid upped the intensity at the back and matched Barcelona on the rebound with great work from Rudy, Taylor and Tavares. They were able to up the percentage on treys. Six points from Llull, with two three-pointers, opening up a 11-2 to get ahead on the scoreboard after being nine down (29-27, min.17). Things settled down in the following minutes with basket for both sides led by Pangos and Ayón (35-35).

Real Madrid raised the level of intensity to almost completely annul Barcelona and the Palacio fans went in to overdrive. They gave everything on every ball, with Ayón running for MVP. Causeur came in to the game with eight points and Randolph was shredding the Blaugrana defense from the outside with two more treys. But Campazzo and Rudy chipped in to a 18-2 run, going 17 up in the 29' (58-41). The quarter finished with a 25-11 for the European champions.

Epic finish to force the over time
The ending was worthy of a clasico for the title. Barcelona was not dead and with a run of 17-1 produced a comeback just as amazing as Real Madrid minutes earlier with Heurtel and Kuric in command. 61-63 and five minutes to play. A triple from Llull made it 70-66 in favor of the Whites in the 36th minute, but Pesic’s side responded with the same medicine and a 10-3 run that made it 73-76 one minute from the end. Campazzo forced over time with five seconds, hitting two of his three free throws. Claver made it 75-77 with a free throw. Llull then stepped up. An incredible play in the last possession, nailing the basket that took the game to overtime for the delirium of the fans (77-77, min 40).

Another controversial ending
The script was not going to change at this point and Barcelona went in to the final 40 seconds of overtime five up, but a trey from Randolph and a 2 + 1 from Carroll seemed to give the title to Real Madrid at four seconds. It seemed, because in the last possession, Randolph made a block on Tomic that the referees considered illegal after going to the replay, allowing Barcelona to get the winning basket (93-94, min.45). 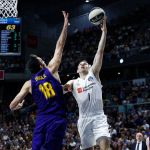