It was a wonderful display from both players as the team overcame Anadolu Efes in the final moments.
Wizink Center

84
What better way to bring up your 400th Euroleague game than with a win? Real Madrid had read the script this evening, as they overcame an Anadolu Efes side who made their lives difficult throughout with impressive accuracy, aggression and a refusal to give up until the final sixty seconds. It was a fine performance from the Whites, but two names stood out about the rest: Randolph (24 points -14 in the first quarter- and 28 PIR) and Llull (19, 12 in the final quarter and 8 rebounds), as they took Madrid to their sixteenth win so far this European campaign.

The scoreboard remained at zero for some time, but when it did change, it was a superb Taylor dunk which broke the deadlock. This was followed by a Causeur basket in a spell where the Whites enjoyed an early lead. Then, though, Anadolu Efes' offensive cogs began to click into place with Simon and Micic in control, taking the initiative and moving to a six-point lead, before Randolph came to Real Madrid's aid. First, a 2+1, followed by three triples, and finally a two-point effort which levelled the match at 21. The American enjoyed a ten-minute spell of 14 points and a PIR of 16.

Tight affair
The team from Istanbul made a break on the board once again with a 0-5 run early in the second quarter, before an inspired Motum (7 points in a row) added to their lead. For the Whites, Tavares came to the fore, recovering balls around the hoop and driving forward without mercy (6 points). Carroll then made his comeback after a month out through injury, and swiftly netted a fine three-pointer, but his effort was quickly matched by a sharp-looking Micic. Next, Llull netted his first of the game, Campazzo stole a ball and maid the opposition pay from the 6.75 and the scores were back level again going into the break (42-42).

Madrid had to limit its turnovers and remain in the battle on rebounds (21-12 in the first half). Taveres continued to rack up points, whilst Llull was performing well on rebounds, where he beat his record and Randolph netted a stunning coast to coast and posted another seven points. Pablo Laso's men were pulling clear, but Anadolu wasted no time in producing a response. Llull started to sink points, before he produced the play of the game: a steal, a pass between Simon's legs and a basket. The Palacio faithful went wild as the scoreboard showed 64-61.

Llull steps up to the plate
Reyes didn't come on until the half-hour mark and, when he did, he sunk six straight points as he gave the Turks' defense plenty to think about. Madrid tore up another run of +7 but the guests hit back through Pleiss. Llull had already started to go up through the gears and he went on to reach fifth: two treys to tally eight straight points and an eight-point run that left Ataman's charges on the ropes. Ayón, who got the hosts playing throughout, came to the fore in the scoring stakes. However, Anadolu Efes didn't throw the towel in, even when the Whites were +9 (81-72), but another triple from Llull put the match beyond the Turks and a steal and trey from Campazzo saw Madrid overcome its fierce opponents (92-84). 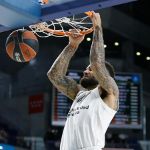