The Frenchman hit his second brace inside four days and Llorente rounded off the win over Girona, Real Madrid's fourth in a row.
Montilivi

1
3
Real Madrid are into the Copa del Rey semi-finals as they continue their superb run of form and results. Leading the way is none other than Karim Benzema. The French forward is enjoying a sublime spell of form, netting his second brace in just four days tonight at Montilivi. Marcos Llorente put the icing on the cake to make it 1-3 against Girona and put the Whites among the final four teams bidding for the title as the competition's leading scorers.

The two teams both played their part in an exciting opening spell with lots of goal-mouth action at either end. Granell showed the hosts' intent early on with a shot which struck the bar after just 2 minutes. Madrid began to take control of the game though and looked to threaten Iraizoz's goal. The lively Benzema gave some early warning signs, with a shot on the half-turn quickly followed by another effort after a fine cross from Carvajal, before Kroos tried his luck from the edge of the box.

Benzema puts on a show
With 26 minutes gone, Benzema came close to opening the scoring with a shot across goal, but he was just getting his eye in, going on to make it 0-1 just a minute later. The Frenchman burst into the area, exchanging a nice one-two with Carvajal, and beat the onrushing Iraizoz. Girona refused to give in though and went on to test Keylor through Lozano and Granell. As the game became increasingly end-to-end, Vinicius and Marcelo linked up in sublime fashion before the left-back unleashed a shot which was smothered by Iraizoz. As the hosts were gaining confidence in attack, Madrid pounced to make it 0-2. Vinicius laid the ball to Benzema, who sealed his brace with a beautiful curling effort reminiscent of Sunday's strike against Espanyol. Half-time then came about after Navas reacted superbly to deny Stuani.


Real Madrid began the second half with a comfortable advantage thanks to their superiority at both ends of the pitch. Although the pace of the game dropped somewhat, and Girona seemed to sit a back a little, Solari's men didn’t relent in their efforts to add to their tally. The Benzema-Vinicius connection continued to cause the home side problems until the manager changed things around as he looked to rest some of his players. The game's double goal-scorer, Ramos and Vinicius were replaced by Asensio, Nacho and Bale.

Llorente's goal
In the 65th minute, Asensio forced Iraizoz in to a save and Lucas Vazquez hit the post with the rebound. Girona, who had barely bothered Navas in the second half, reduced the deficit with a counter that was finished off by Pedro Porro (71'). A shot from Bale caused problems for Iraizoz, before Marcos Llorente made it 3-1 on the night with a well-struck effort from the edge of the area (76'). As the tie drew to a close, there was still time for chances for both teams. Raúl Carnero and Bale came closest, but the score line remained the same to seal a fourth victory in a row and a place in the semi-finals. 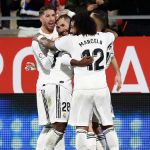