Real Madrid face Viktoria Plzen on match day four in the Champions League group stage (Wednesday, 9:00pm CET).
Real Madrid have arrived in the Czech Republic. The European Champions face Viktoria Plzen on Wednesday (9:00pm CET). The Whites' squad of 20 players set off from Adolfo Suárez Madrid-Barajas airport  and landed in Prague around 12:30pm. They are now heading to Pilsen.

This evening, Solari's side are set to train at the Doosan Arena, home to Viktoria Plzen. They are hoping to make the final preparations needed before the match, corresponding to match day four in the Champions League group stage. The Under-19s joined the first team on the journey, as they will be playing their corresponding UEFA Youth League tie (Wednesday, 1:00pm CET). 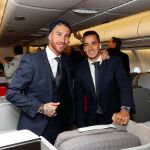