The brand are dressing the football and basketball first-team squads and the Castilla players for the third consecutive season.
The football first-team squad have posed in their new official Boss suits. The navy blue garments belong to the   Create Your Look range and are combined with a pure white dress shirt. The look is completed with a navy blue tie with diagonal white stripes, a navy blue leather belt and shoes in the same tone, died in Oxford style.

Hugo Boss has been a Real Madrid sponsor since the 2016/2017 campaign and dresses the football and basketball first teams as well as Castilla and the Club coaching staff. 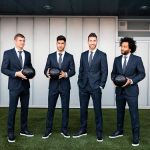