The name of Serena went in to the Real Madrid history books thanks to his goal in the final against Partizan when winning the sixth European Cup. His well-placed shot from distance made it 2-1 in the final, completing the Whites’ comeback in Brussels. Real Madrid share the pain of his family and would also like to share their condolences for his death. 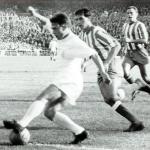