A meeting between the two best three-point throwers at Real Madrid in ACB history.
Last Sunday, on the first match day of the Endesa League season against Iberostar Tenerife, Sergio Llull became Real Madrid's leading three-point shooter in the ACB with 662, surpassing club legend, and current technical director, Alberto Herreros (661). A few days on and the Real Madrid triple kings met at the pavilion at Real Madrid City to talk about the record. Despite his impressive numbers, Llull is clear about one thing: "I hope my best trey is still to come".

"I’m very proud, for me it is an honor to be the top three-point shooter at Real Madrid in the ACB and to overtake Herreros, a legend of this club. It's cause for real satisfaction and keeps me motivated to continue working and adding to that number". Alberto Herreros’ record had stood for 14 seasons,  and he was happy to pass on the crown to a friend: "For me it is a joy because I‘ve a lot of affection for him. If someone had to beat that record, I’d not want it to be anyone other than Llull. He has a lot of three-pointers left to shoot and I'm sure he will continue to add to the record and make it unattainable for anyone. He's going to beat many more records, not just this one".

The current Real Madrid player described his predecessor as "one of the best three-point shooters in history. He has the absolute three-pointer record in the league, a figure that nobody will ever be able to reach. He was a great trey specialist". Herreros disagrees: "I think he will take the league record and will continue to set others. He is not only a shooter. He can do a lot more. He’ll be close to the record for assists, recoveries ... All these individual awards, Llull deserves them".

The key to being a good shooter
Both reveal the qualities that a specialist has to have in the three-point shot. According to Llull "he must have a good technique, a good touch to release the ball at the end and have good teammates who also pass it at the right time and leave him in space. There are many qualities together that a good shooter needs, as with Herreros, to set a record like that". The current technical director for the section advocates "having talent and working at it. To have the confidence that Llull has, that he knows that at any moment he can shoot and put it away. It doesn’t matter if it's nine, six or four meters. All these aspects of confidence, physique and talent are embodied in a player like Llull".

Llull's bounce shot and Herreros' technique
No shooter is perfect, not even the one who was a Whites player for nine seasons. He confesses what he would have liked to have from Llull: "I didn’t have as much shooting range as he has. He is able to get up from nine meters. Another thing that I envy is his bounce shot. I was more escaping the blocks and shooting. The bounce shot, which I see as the most difficult, Llull has nailed".

The record breaker recognizes that he paid a lot of attention to Herreros' shot: "I liked his technique a lot when I saw him play. He was perfect, like those that they teach you in basketball school. When it comes to netting decisive triples like the one in Vitoria to win the league...That coolness and that confidence really impressed me".

Among a long list of triples to choose from, Llull opts for the one he netted at La Fonteta from inside his own half: "For the time being, I'll go for the one in Valencia from my own half. It’s one of the best in my career, spectacular and also served to win the game. I hope my best three-pointer is still to come and hopefully I can finish my career as Herreros did, putting away a basket to win a title".

For Herreros it is easier to choose: "Mine is obvious. Not only to win the title but because it was my last shot of my professional life. It was a perfect ending. It's everything a player wants, to score the decisive basket and win a title before retiring".

Llull’s 'tangerines'
The base-guard has patented a new way of shooting treys, surprising for some but not so much for those who know him. "In the end, when you run out of possession or the game you have to try to speed up your options to get a basket. You have to look for quick solutions and many of them are long shots. I trained since I was a child, making the typical countdown from 5 to 1 at home and now what I do is move it to a professional level. These are moments in which you have to have a lot of confidence and try to finish it well", explains Llull.

Herreros, who sees him every day in training, sees it clearly: "When he throws a tangerine I always think that it will go in. From the beginning, when they talked about his tangerines they said it was luck, but it’s not a coincidence that always puts them away. He has a good percentage in those last spectacular shots. When Llull has the ball in his hands from the box everything seems much calmer".

His shooting references, then and now
Herreros explains that when he was a child he watched "Petrovic, of course, but there was a player I loved and who was also a Real Madrid player, Brian Jackson, I don’t know if Llull will have seen him because it was a long time ago (laughs). He's one of the best shooters I've ever seen, and now, without a doubt it’s Carroll".

Llull looks across the pond: "I was very impressed by Reggie Miller (former player of the Indiana Pacers in the NBA). His technique was not very aesthetic, but he put them all in. Also Ray Allen or even Michael Jordan who, although he was not the best shooter, had a perfect technique". And he has no doubt about the best at present: "Carroll. Because of the speed with which he releases his arm, he can shoot in any position and has perfect technique".

One of this Real Madrid side's greatest weapons
The team led by Laso always threatens from 6.75 meters thanks to specialists such as Llull, Prepelic, Carroll, Thompkins, etc...This is how Mahón sees it: "For us it is an important asset to have great shooters in the team. In addition, with the style of play put forward by Laso, more colorful and dynamic, we try to play faster, run more counterattacks and find the free shot".

The perfect trey
Llull is categorical: "The perfect trey would be what Herreros did in Vitoria. Scoring the decisive triple in a fifth game of a final. The ball comes to you, you do not even think about it and you pick it up, it goes in and you can win that title for your club. It must be a great feeling to experience that moment". Herreros prefers not to go that far: "I’d like it not to be in the fifth, but to be in the third (laughs) so as not to suffer so much. Llull has hit many decisive shots like that in the Copa del Rey in Málaga. I hope that his perfect three-pointer is still to come and it will help us win more titles".

Who throws the decisive three-pointer?
In a hypothetical team with Llull and Herreros together on the court. "We would have problems (laughs). The one that at that moment was more confident and is better placed. But I think he would shoot it... especially because he's the one who comes out with the ball and I would not get it", says Herreros. Llull would not throw a tangerine this time: "We would take turns, one game him, the next one me". 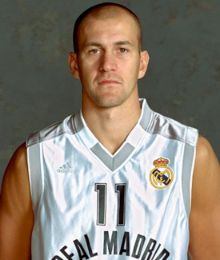 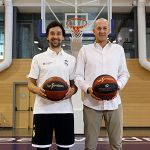