The pair attended to the club members at the team hotel.
Odriozola and Mariano took centre stage at the fans' signing session in Bilbao. The duo, who checked in at the club this summer, revelled in the shows of affection from the fans who attended the event, which was held at the Bilbao Nervión, the team's hotel ahead of tonight's game (8:45pm CEST).

The right-back and forward mixed freely with fans and repaid their support by handing out signed picture cards and posing for photos. Excited at the chance to see their heroes at such close quarters, several supporters expressed their confidence in the team: "We've made a really good start in LaLiga, have a fantastic team and we're going to win tonight at San Mamés", declared one of the fans at the close of proceedings. 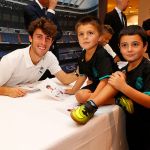