Ramos, Marcelo, Varane and Modric were in the FIFA FIFPro World XI and Courtois won FIFA's The Best award for goalkeeper of the year 2018.

Luka Modric will always remember the 24th September 2018. After a sublime season, he won FIFA's The Best prize for player of the year 2018, in a gala at the Royal Festival Hall, London. The Croatian held off Cristiano Ronaldo and Mohamed Salah, finalists in the vote which was made by national team coaches and captains, a journalist representing each national side and fans registered on FIFA.com. The madridista star got 29.05% of the votes, Cristiano Ronaldo got 19.08% and Salah got 11.23%.

FIFA recognised the great season Modric has had, as he was a fundamental player for Real Madrid and Croatia over last season. With the Whites, he won the Champions League, Club World Cup, UEFA Super Cup and Spanish Super Cup. With his national team, he reached the final of the Russia World Cup, where he won the Golden Ball for best player. In August he won the Prize for UEFA player of the year 2017/18 and was named best midfielder in last season's European Cup.

As well as Luka Modric's award, Real Madrid were well represented, with four madridistas in the FIFA FIFPro World XI 2018. Ramos, Marcelo, Varane and Modric were all in the team and no other club had as many player featured. Courtois won FIFA's the Best prize for goalkeeper of the year 2018, beating Lloris and Schmeichel.

Real Madrid's reign in world football was on show yet again at the gala where the White's players were widely praised. Modric was grateful in his accpetance speech, saying: "This trophy is dedicated to my Real Madrid and Croatian teammates, as well as my coaches. Without you it would never have been possible”. Florentino Pérez, spoke about this great moment for the club: “We are witnessing a historic era. I am as thrilled as all the other Madridistas. It is brilliant for those who want this club to show year after year we can have so many players in the FIFA eleven”. 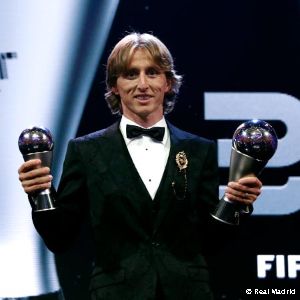