Benzema scored the only goal for the Whites, who had chances to beat a Manchester United side who looked sharp.
Hard Rock Stadium (Miami)

1
Real Madrid led by Julen Lopetegui deserved more against Manchester United in their first preseason game. The Whites, who were better than their winning rivals, had chances to draw the game in Miami. The match started with a lot of rhythm and some chances for both the teams. The first came for United, but Mata's shot in the six-yard box did not go in on 5 '. Three minutes later, Real Madrid fought back in a nice team move, which ended with a cross from Odriozola and a shot on goal from Benzema which was centimetres wide.

The chances kept coming and Manchester United on 18’, scored. Darmian set up Alexis, who rifled home. The British side went further ahead before the half hour mark. Mata was better than the Whites' defenders, and he passed it to Alexis who headed onto Herrera, who stormed in to send the ball past Casilla.

The European Champions tried to reduce distances with a shot from Bale that hit the woodwork on 31’, but eventually the goal came before half-time. Theo and Benzema got past the defense to score Real Madrid's first goal of 18/19 with a subtle finish.

Chances
Lunin, Reguilón, Odegaard and Mayoral replaced Casilla, Theo, Bale and Benzema at half time, after which Real Madrid came out looking for a draw. they came close to getting it on 57 '. A pass back from Reguilón and Odegaard's shot from the penalty spot flew high. The Whites kept their opposition penned in the area and again the Norwegian midfielder, had the chance to equalise in the 75 '. Lopetegui sent on Nacho, Isco, Kroos and Asensio to continue the siege. A cross from the Majorcan could have made it 2-2 but Raúl de Tomás could not score a goal. In the added time, Nacho had a great chance. His left-footed shot from the edge of the box hit the crossbar and there was no time for anything else. 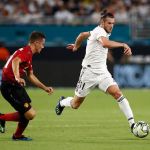