The Whites saw off Liverpool in the semi-final in a 9-3 win before playing out a 3-3 draw against Shevchenko's side in the final.
A team of Real Madrid legends lined up in the Ultimate Champions tournament, which on the eve of the final of Europe's elite club competition saw a clutch of stars from within the game and other athletes descend on a pitch set up within the UEFA Fan Zone in Kiev.

The Whites team was managed by Emilio Butragueño and featured Dudek, Salgado, Arbeloa, Roberto Carlos, Karembeu, Makelele, Seedorf, Cambiasso, Mijatovic and Suker. The madridistas swatted the Liverpool Legends aside in the semis in a 9-3 win before going on to draw 3-3 in the final against a side featuring Shevchenko and his friends, after they had prevailed in the other semi-final over a Champions League Legends team. The participants posed for a group photo at the end of proceedings, which were witnessed by a large number of supporters in the stands. 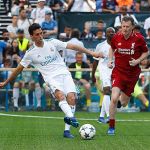