“Thanks to all madridistas for all your support, and hopefully we can celebrate another title on Saturday", commented Asensio.
The Real Madrid squad spoke to the press prior to the Champions League final, against Liverpool in Kiev (Saturday, 8:45pm CEST). Marcelo summed up how the dressing room is approaching the big night, speaking to Realmadrid TV: “We are training well. We all feel good and our mind is set on the final. It will be special to play another final and it will be hard going because Liverpool have done brilliantly and they deserve this. They are a great team and we've seen just that over the season."

"We all really want to play. There are three training sessions left for us to prepare as well as we can and, although in a final anything can happen, we have that drive and motivation to win for ourselves and for the club. As we have won the last two it seems easy, but it is not. Every training session, each match at home and away takes its toll and reaching a final is tricky. We know how difficult it is and that is why we are hungry to win it. Playing a final is a true honour and something to savour."

Asensio: “Liverpool have a brilliant dynamic”
“We're raring to go, really excited to be in another final. We know this will not be a walkover. Liverpool have a brilliant dynamic, they've had a terrific season but we have to believe in ourselves. In Cardiff, it was a real rush, because it was my first final and scored. This term I had some memorable moments and I got that key goal in Munich, that really helped us in the knockout tie. Thanks to all madridistas for all your support, and hopefully we can celebrate another title on Saturday”.

Casemiro: “We are ready”
“We know the fans believe in us. Their support is so important for us and hopefully we can celebrate in the Bernabéu on Sunday, having won the title. We are ready and with the fans backing us we are stronger. In football, you always have to go out and try to play the game. There are no favourites. It is a Champions League final and we must respect Liverpool. We know it will be a tough game, but we want to win”.

“My role is clear. I have to bring balance to the side, help out my teammates. We know their front three are on fine form, but we have respect for all their players. They are powerful, aggressive at the back and you have to be careful”.

Nacho: “There is always pressure in the final”
“The team are confident, we want the final to come around. We beat teams along the way who could have been in the final, they were champions of their teams and we are content because we have played the best. We have just Liverpool to beat, they will be the same if not better. These are special games and we have to remain calm. There is always pressure in the final. We have an important challenge ahead in winning it three times. That makes us concentrate and go out there looking to make history. We are ready for these kinds of games”.

Kovacic: “Playing yet another final is truly special”
“We are doing well, Playing yet another final is truly special. Since arriving at the club, we've always been a handful in the Champions League and it seems normal, but it isn't. I am doing well, I have worked hard to get here and every year I feel better, even though there is a lot to learn. Hopefully the madridista fans will be with us as we try for la Decimotercera. Hala Madrid”.

Casilla: “We are doing something pretty spectacular”
“At the moment, we are not so aware of what is going on around us. As the years go by we will value it much more because now we simply don’t have a second to think. It's something spectacular. It seems like it’s easy, but it has not been a walk in the park. This week of the final is very intense, people stop us on the streets and talk to us about bringing another Champions League home”.

Llorente: "We are feeling good"
"We’re calm, ambitious and full of desire. We feel pretty good. Despite being the third final in a row it still feels like the first. We are training hard and we can’t wait for Saturday."

Achraf: "The coach believes in me"
"From the very first day I had a lot of faith from the coach and for me this has been a tremendous season. I look up to Carvajal because he sets such a precedent and is the best full-back in the world. " 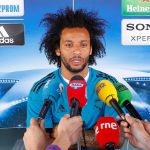