"We had a game plan and followed it; we didn’t give up or doubt ourselves at any time" explained the technician.
Pablo Laso spoke as EuroLeague champion in the press room of the Stark Arena in Belgrade: "I always start by congratulating my players. They’ve done a great job today, on Friday and from the first day of training. It’s been an incredible year for us and we knew that nothing else could happen to us. You see the importance of a team when people take a step forward in bad times. They have sacrificed and tried every day. I'm very happy, it was a great game of basketball. The entire Final Four has been a spectacle. I’m very proud to be European champion".

"Real Madrid is Real Madrid. I respect Fenerbahçe a lot as a team. It’s a team that has played this final for the third year in a row. That not only speaks well of them and Obradovic, but also of the club, but we had a plan and stuck to it. We were clear about what had to be done and we haven’t give up at any time. We didn’t hesitat, just a bit in the end because they’re a tough team and they tried to get back in to it".

Role of the pivots
"We have great creators on the team, but if you want to be a great team you can’t depend on anyone. We value what our tall men give us. Their work has been of the highest level and their work has been decisive in both the playoff and the Final Four".

Stopping Dixon
"When a star like Llull is able to sacrifice to stop the opponents, it says a lot about him. We knew that their defense was important because it could change a game. Everyone has adjusted to Dixon's defense and we made that clear in our plan".

"Aside from my basketball ideas, I am lucky to train great players, but the most important thing is that Real Madrid wins games. Today they did all their work perfectly, made very few errors. It shows the strength of a team and the knowledge that everyone has to be prepared to do what is necessary. You can always talk about the game and I love it if Real Madrid wins. Everyone was ready to do their job and we played with real style".

Doncic, Rudy and Reyes
"Doncic has had a great year, he won the Euroleague and the ACB, congratulations to him and I hope he continues to grow as a player. If I say that Rudy is one of the best defenders in the world, then it is nothing new. He is a very intelligent player and we thought he was the best option to defend Kalinic and Datome. Reyes is a real fighter. If you think about Reyes, you think of those rebounds, he knows how to position himself very well. As for the decisive Thompkins rebound, I did not think the game was won nor lost at that point".

Motivation
"Sometimes the only way to get up is to give yourself a slap and Panathinaikos gave it to us. That made us react. This year the team worked very well in spite of the problems we have had. I have congratulated them all and I told them that they deserve it. It is a prize that is earned with a lot of work. We were able to beat CSKA, who were first in the Regular League, and Fenerbahçe, the reigning champions". 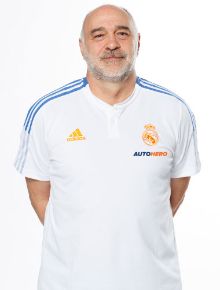