The team downed Iberostar in the showpiece, with Ndiaye the team's standout performer (19 points and 20 rebounds).
Real Madrid emerged victorious to take the Minicopa Endesa crown after seeing off Iberostar Tenerife in the final. The Whites produced a masterclass, with six players finishing the game in double digits in the scoring stakes as Ndiaye (19 points and 20 rebounds) leading the way. Real Madrid president, Florentino Pérez, was on hand to see the Whites' youth team take the title for a sixth straight year.

Las Palmas's Centro Insular played host to what proved to be a pulsating showdown. Both teams played their part in a gripping contest, which was tipped in the Whites' favour in the closing minutes. The madridistas dictated the tempo and held small leads through. Madrid went in for the break 40-36 up.

The holders put the game to bed
The Tenerife-based outfit gave Real Madrid a real game and with the backing of the home faithful managed to get on top with four minutes remaining at 65-64. The Whites retained their focus and produced a quick reaction. Madrid conjured up an emphatic response to ultimately win the contest by a 10-point margin (73-83, min. 40).

Photo with the president
After collecting the trophy, the roster and coaching staff posed alongside Florentino Pérez and the trophy in the centre of the court. The Real Madrid president congratulated the players on their triumph. 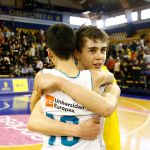