Florentino Pérez presided over the event which recognises members who have served 25, 50 and 60 years of uninterrupted loyalty to the club.
The event for the 2017 presentation of insignias took place in hall number 6 at IFEMA and was chaired by Florentino Pérez, an event which takes place every year in which Real Madrid recognise the loyalty of its oldest member. The club presented 2,098 insignias: 101 shining gold ones for 60 years, 489 gold for 50 years and 1,508 silver for 25 years.

Florentino Perez presented them along with the president of honour, Paco Gento who gave out the shining gold and gold insignias. The members had the opportunity to be photographed with the 12 European Cups at the event in which the most recent titles won by Real Madrid took up a prominent place.

Butragueño: "Thank you very much for your support and commitment"
Emilio Butragueño, director of Institutional Relations of the club, oversaw the event and said: "We are proud to be part of this great club with 115 years of history. 60 years have passed and we remember it as if it were yesterday: 1957 is engraved with bright gold. Real Madrid won their second European Cup by defeating Fiorentina in a final in which the second goal was scored by a legend at Real Madrid, our honorary president, Paco Gento".

"A decade later, in 1967, Real Madrid regained its dominance in Spain. The 12th league was won and the basketball section continued making history by winning their third European Cup in four years. 25 years ago, in 1992, our basketball team won their second Cup Winners' Cup with a basket in the last second by Ricky Brown. That year also brings to mind one of the great legends: Juanito who left us. Today we pay homage to you, 60, 50 and 25 years of passion for Real Madrid". 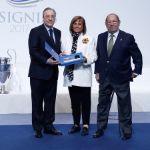