"We're living one of the best periods in our history and we've got the team to keep on dreaming”, said the president at the insignia presentation event 2017.
Florentino Pérez has presided over the presentation of insignias to Real Madrid members who have reached 25, 50, and 60 years of unabiding loyalty to the club in 2017. The president thanked the members for their support: “Real Madrid is the most prestigious and well admired club in the world, thanks to you. That's why this club would like to express its immense gratitude for your loyalty and unrelenting commitment over the last 25, 50 and 60 years”.

“Your strength and continuing dedication have helped us set the benchmark in the footballing world. In these 115 years of history, our club has experienced wonderful moments, but has also gone through certain difficult times. We would not have come through these times without the unity of madridismo and without your vocal support”.

Memorial to Luis Gómez-Montejano
“If I may, I'd like to say a few words about the man who served as president of Real Madrid, Luis Gómez-Montejano, our colleague in every Board Meeting which I have conducted, who left us just a few months ago. Today would have seen him collect his golden insignia for 60 years of service and dedication to Real Madrid. It will be collected by his daughter, Maribel Gómez-Montejano”.

Legends
“Transcendental personalities in the life of Real Madrid such as Santiago Bernabéu, Alfredo Di Stéfano or our honorary president, Paco Gento, set us on the track towards legendary status. An enthralling history and a road full of titles and sporting successes, and one that has always been guarded by those principles which have made our club the most well admired around the world”.

“In a footballing world that is increasingly complex and competitive, our model continues to set the benchmark for success. That is thanks to the unity and strength of madridismo, knowing that as a team, we never give in”.


“We've got a team to keep on dreaming, with a wonderful coach in Zinedine Zidane, who has already won everything there is to win at Real Madrid, his lifelong club. He's one of our great symbols, a great icon who encompasses the values and talent one needs to be the leader of one of the greatest squads ever assembled, captained by Sergio Ramos and Marcelo, another two examples of our values”.

Cristiano Ronaldo
“I'd also like to mention our player, Cristiano Ronaldo. He is another of our biggest icons, successor to the great Alfredo Di Stéfano. Cristiano is the leading goal scorer in the club's history. He's just picked up his second FIFA The Best Award in a row, and I'm sure that next week, he'll get his hands on his fifth Ballon d'Or”.

Present and future
“We're experiencing one of the greatest periods in our history. Real Madrid is today a model of organisation with a solid financial grounding and the institutional stability which serve as a base to continue at the forefront of the sport”.

“You are Real Madrid and you carry it with you in your hearts. You have created this legend. Our future is guaranteed with members like you who make the dreams of every madridista come true”. 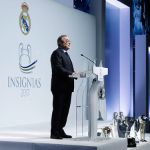