2
Real Madrid have chalked up an important victory against Málaga at the Bernabéu. The game started at a frenetic pace, and barely half way into the first period, there were already three goals on the board. Madrid were the first to strike. Marcelo bent in a cross with 9 minutes gone, and Cristiano Ronaldo rose highest to turn the ball towards goal when it looked like coming to nothing. The ball came back off the bar, where Benzema was waiting to poke home with ease.

The Whites could have gone further in front just six minutes later, when Carvajal struck Kroos' measured cross at goal, but Roberto was able to keep it out. A potential 2-0 quickly turned into 1-1 when Rolan popped up in the box on 18 minutes. It was back to square one for Madrid, but they wasted no time at all in regaining control. Kroos whipped in the corner with 21 on the clock, and Casemiro headed home to make it 2-1.

More chances
That was it on the goals front before half time, but the chances did continue to flow, especially for Real Madrid. Cristiano Ronaldo was heavily involved, but he was kept out by two stunning saves by Roberto, first from his fine left-footed strike on 37, and then a towering header just five minutes later. Just before the break, Baysse had the ball in the net, but his header was ruled out for a foul on Carvajal as he jumped.

The second half started at a slower pace, but Real Madrid had a chance to increase the deficit when Kroos struck from the edge of the box. Roberto was able to turn it behind on 52’, and it was Málaga who would net next, when just six minutes later, a long-range Chory strike beat Casilla. It was all square once more with half an hour still to go.

Cristiano nets the decider
The Whites kept looking for the winning goal and in the 64th minute Lucas Vázquez was brought down inside the area by Recio but the referee didn’t point to the penalty spot. Then, 11 minutes later, Modric, who had come on for Isco, was fouled by Luis Hernández and this time the referee blow his whistle. Cristiano Ronaldo stepped up, his initial effort was saved by Roberto but the Portuguese forward made no mistake with the rebound. Real Madrid managed to keep hold of their lead as they racked up another three points in the league. 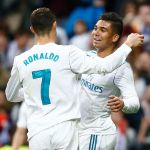