"So long as we've maintained the unity of madridismo, we've achieved our objectives regardless of how impossible they may have appeared”, added the president in his opening speech at the 2017 Assembly.
The Real Madrid president, Florentino Pérez, opened the Members General Assembly of Delegate Members 2017, which took place at the conference hall 10 at the IFEMA centre. His speech saw him pay tribute to members and madridistas who are no longer with us, including Kopa, Ángel Nieto or former directors Luis Gómez-Montejano and Gregorio Paunero, as well as praising the 2016-17 campaign, the most prolific in the history of the club: “We've experienced our best season, in terms of title triumphs, in our 115-year history. Four titles in the same season”.

“It's the first time that Real Madrid have won the Champions League, LaLiga, the Club World Cup and the European Super Cup. We hadn't won a league-cup double since 1958 - 59 years on, and this team was able to bring us the third double in these competitions in our club's history”.

The squad
“We're the first club to win two consecutive European Super Cups in the Champions League era. We also got our hands on the Spanish Super Cup with two fantastic performances against Barcelona”.

“All of this has been achieved through the talent and the values of a squad of exceptional players, with the best players in the world, the best Spanish players and the best of our academy system. It's a squad which through hard work, togetherness and a winning spirit, have written themselves into the club's history books”.

La Duodécima
”This is the latest symbol of our legendary status. This is La Duodécima. The second consecutive European Cup, the third in the last four seasons. Another milestone in the history of this club, which has again been a pioneer, achieving something that had previously seemed impossible. This twelfth European Cup, won in Cardiff against Juventus, represents what we're capable of when we're united”.

Cristiano Ronaldo
“It's a squad that we should be proud of because it contains the best player in the world, Cristiano Ronaldo. Four Ballon d'Or trophies, the fifth on the way. Four Ballons d'Or. Already a winner of The Best FIFA prize and surely on the way to claiming it for a second time. Just last month, in August, he was also awarded the UEFA Men's Player of the Year trophy in Monaco for the third time”.

“He's Real Madrid's all-time leading goal scorer. He's played 400 games and scored 412 goals. Cristiano continues to break records because he is the best exponent of the madridista DNA. Talent and ambition to achieve the impossible. That's Cristiano Ronaldo and that is Real Madrid”.

Sporting planning
“We've strengthened the squad this season with very young players, but guys who have already shown their quality in big leagues such as Spain and Germany, as is the case with Theo, Ceballos and Vallejo. At the same time, we've brought back some academy players from loan spells, like Marcos Llorente and Borja Mayoral, and they come in eager to succeed with the first team, just like our goalkeeper Luca and defender Achraf, who have come up from Castilla”.

“Real Madrid has consolidated a model which has seen us recognised by the European Club Association as the best club in Europe for the last two seasons. A model which in sporting terms, has allowed us to keep the best players in the world, the best players in Spain, and bring in young footballers full of potential, with the quality to succeed at Real Madrid, the top side in the world”.

Togetherness
“The figures who have been great examples in our history showed us to fight to the end in the quest for victory, to value teamwork above all else, to respect our opponents, compete fairly, and never give up”.

“So long as we've maintained this model, and the unity of madridismo, we've achieved our objectives regardless of how impossible they may have appeared. I truly believe, that all together, we have managed to put Real Madrid in the position that its illustrious history demands. A history which shows Real Madrid has won the last 11 international finals that we've been involved in”.

“Zinedine Zidane represents all that Real Madrid stands for. He's been crucial in the recent history of our club, when he arrived here as a player, and now as a coach. He's been crucial due to his management of the group, his knowledge, hard work and professionalism. He's leading a unique group of players who are destined to mark an unforgettable era, who are bringing us real joy and realising the dreams of millions of madridista fans all over the world”.

Our members
“Together we've achieved the institutional stability which is crucial in handling the present and future of this club. Throughout history, all the successful cycles at Real Madrid have coincided, as is the case now, with a stable, solid club. Unity and stability are the most important elements and they are what have enabled us to become the biggest club in the world”.

“We will continue to work to ensure the destiny of this club remains in our hands, in those of its members. That's the way it's always been throughout its 115-year lifespan. And because that's the most significant legacy we've received from our forebears”.

Financial strength
“We've enjoying one of the most successful periods in Real Madrid's history. Leading on both a sporting and economic plain. Throughout the years, Real Madrid has consolidated a sporting-economic model which has placed us at the vanguard in this domain”.

“Our financial security is the base of our independence. If the club is to continue in the hands of its members, our leading position in economic terms is fundamental. We're eclipsing our record revenues year on year. Operating revenues for 2016-2017 have reached a figure of 675 million euros, an 8.8 per cent increase on the previous financial year”.

Basketball
“We're enjoying an extraordinary period which has allowed us to take delight in a sport which has contributed so much to Real Madrid's prestige. We've won 13 titles in the last six years. 1 EuroLeague, 1 Intercontinental Cup, 3 LaLiga titles, 5 Copa del Rey trophies and 3 Spanish Super Cups. This team has enamoured us all once again and they deserve enormous credit from every madridista and everyone who loves basketball”.

Support for Llull
“He's been a crucial part of this successful cycle and we're sure he'll be back stronger and hungrier than ever. Voted as the best player in the EuroLeague, the Endesa League and the Copa del Rey, he's of course one of the greatest symbols of this squad, but I'd also like to highlight our captain, Felipe Reyes, who set a new record last season, becoming the highest ever rebounder in ACB history”.

Academy
“The academy forms part of our essence, and it's our future. This year, there are nine players in the first-team squad who have come through the academy set-up. That's a huge source of pride for us and it gives us real hope for the future. Our academy is, above all, a great learning centre, training in life and values, and every year confirms it further as the best in the world”.

Real Madrid City
“It is always growing, and I'd like to announce that the new corporate and club office building will be up and running very soon, with the work on them practically complete. Real Madrid City continues to grow and it fills us with emotion and a sense of belonging. It's a source of great pride for all of us who are part of this institution”.

The Santiago Bernabéu
“We're still laying the foundations which will enable us to carry out on of the club's most ambitious projects. As everyone knows, it'll be a complete overhaul of our stadium, the Santiago Bernabéu. The stadium is set to become an engine which will revitalise Real Madrid. The approval of the stadium's Special Urban Plan was a huge step in the right direction. The Madrid City Council passed it on the 31st of May without opposition”.

Real Madrid Foundation
“Real Madrid was a pioneering club in terms of founding a universally valuable charitable organisation. The work done by the Real Madrid Foundation throughout the years has helped the most disadvantaged in society. I must say, that everything we do to bring hope to those suffering in the world, especially the children, is the least we can do”.

“We're present in 75 countries, with more than 450 projects, largely designed for children at risk of social exclusion. We have almost 300 socio-sporting schools spread around the world which help 55,000 boys and girls. Across all the Foundation's social operations, our projects help a total of more than 95,000 people”.

Our mass media
“Real Madrid has a larger audience than any other sporting institution, brand or organisation in the world. The club's social networks boast more than 275 million users and provide content in 8 languages. We achieved another historic feat in this regard, becoming the first sporting brand and institution to reach 100 million Facebook followers, while the videos across our social media profiles were viewed 2 billion times”.

“Realmadrid.com is the most visited football club website in the world. The number of page views on our site topped 300 million last season, representing a 21 per cent increase on the previous campaign. Our television is a vital part of our strategy in terms of expanding our media coverage; it has become a great source of content through which to provide audio-visual support to all of the club's official channels. Real Madrid Television is a high-quality TV channel, available in HD and free-to-air, and has become a great reference point for every madridista”. 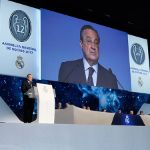