In the 2016/17 season he won the Champions League, the league, the Club World Cup and the European Super Cup with the Whites.

Cristiano Ronaldo is still The Best. The Real Madrid forward reaffirmed himself as the best in the world at the gala held in London. After being the first to win the prize during the 2016 awards, the Portuguese forward picked up The FIFA Best Player Award for the second year in a row. With a 43.16%, Cristiano beat Messi (19.25%) and Neymar (6.97%) in the vote by a jury made up of coaches and captains of the national teams, a specialised journalist who represents each country and fans from around the world registered on FIFA.com.

Between 20 November 2016 and 2 July 2017, the period in which the achievements were counted, Cristiano led Real Madrid, who won la Duodécima, the 33rd league title and the Club World Cup in Japan. Add to that the European Super Cup to complete a historic 2016/17 season for the Whites.

The Whites were the big winners at the gala. Their successful campaign was not only recognised with the main prize for Cristiano. Zinedine Zidane took the The Best FIFA Coach Award for the first time, while Ramos, Marcelo, Modric and Kroos joined the Portuguese forward in the FIFPro 2017 World XI. In addition, Keylor Navas was one of the finalists for the trophy The Best FIFA goalkeeper.

The collective success was reflected in the comments made by Cristiano and Zidane after collecting their awards. "We had a fantastic season, I want to congratulate my teammates and thank them", said the Portuguese forward. And the coach added: "Thanks to Real Madrid for giving me the opportunity to coach these players". Proud of the team's triumphs, President Florentino Pérez said: "We are experiencing a golden age like the one experienced with Di Stéfano". Real Madrid are The Best. 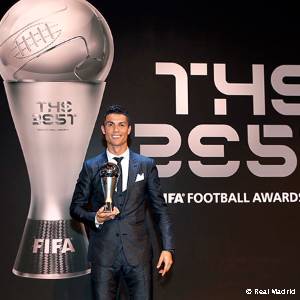