1
This contest between the top two sides in Group H ended honours even. Real Madrid and Tottenham came into the game neck and neck right across the board and their battle to become outright group leaders now carries over to the sides' clash at Wembley. Zinedine Zidane's charges dictated proceedings for large spells and carved out more chances to have emerged victorious. However, the Londoners held firm with a strong rearguard action. Raphaël Varane turned the ball into his own net to hand the visitors the lead and Cristiano restored parity from the spot in a game that featured some fine saves from both goalkeepers.

The Whites began firmly on the front foot, spraying the ball around as the hosts tried to find a way through a well-positioned Spurs backline. Achraf and Cristiano Ronaldo were at the heart of things in the opening stages, with most of the team's attacking threat coming down the wing-back's flank, whilst the Portuguese hitman was involved in the first two sightings of goal. With four minutes on the clock his glancing header cannoned back off the upright and Karim Benzema failed to turn the rebound home. Then, in the 17th minute, Ronaldo again threatened to break the deadlock, but contrived to pull his shot wide of Lloris's goal.

Rough luck
However, Tottenham clearly weren't prepared to sit back and defend and it wasn't long before the visitors began to flex their offenseive muscles. Harry Kane forced Keylor Navas into a fine save with a header from a corner, before the visitors forged ahead. Kane failed to connect with Aurier's centre from the right and in attempting to clear his lines, Varane sent the ball into his own net. That setback spurred Zidane's men into life, who tested Lloris with efforts from Isco and Karim Benzema. But it wasn't until the stroke of half-time that the equaliser duty materialised. Aurier felled Toni Kroos in the area and Cristiano converted from the spot with 43 minutes played.

Real Madrid came out all guns blazing after the break in search of a second goal and came very close to getting it through a Benzema header which brought the best out of Lloris. Ten minutes later, the French goalkeeper again came to the rescue for the visitors, keeping out a well hit shot from Cristiano. With Madrid pushing on, Tottenham looked to rob the ball and hit the home side on the counter. A quick transition from the Premier League outfit saw Kane go through one-on-one against Navas, but it was the Costa Rican who came out on top.

As the game went on, tiredness crept in which led to spaces appearing in both defences, with good chances for the two sides. Cristian Eriksen tried to catch Keylor out before Zidane made a change, bringing on Asensio. The Whites continued to swing in crosses but without creating any real danger. In the end the game finished all square and the two teams are evenly matched at the top of the group with seven points each, six more than Borussia Dortmund and APOEL. 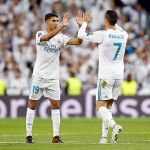