“With the threat we pose we can do a lot of damage", said Nacho in an interview for Codere.
Casemiro and Nacho spoke in two interviews for Codere about the match that Real Madrid will play against Borussia (Tuesday, 8:45pm CEST). The Brazilian said: "Playing in Dortmund is special because that's where it all started for me. The crowd will get on top and it’s difficult to play there. They have a good team, but I think we are prepared to have a good game. It’ll be demanding".

"I like to work a lot and sometimes too much. I know my job is not scoring goals but it's going well and that's good for me and the team. The fans and the opponents don’t really imagine that I’ll score, so I think it's a good bet on me to score and you’ll get a nice surprise".

Titles
"I try to enjoy every training session because it's an honour for me to wear this shirt, which obliges you to win titles. We know we have to work hard but we want to win everything because we´ve got a great squad".

Zidane and Cristiano Ronaldo
"Zidane is the best and Cristiano in training is the most difficult player I've ever come up against".

"We must continue do the things we’ve been doing: playing as a team, running more than the others and with the threat we pose we can do a lot of damage".

The season
"We feel very positive. We started the season very well winning two Super Cups in very difficult matches and we’re very excited about everything that’s coming up. Playing for this shirt requires you to win every possible title. We’ve got a very good squad and we’re prepared for it".

A youth team product in the first team
"Since you're little you dream of playing at the Bernabéu and wearing this shirt for a long time. I’m lucky enough to be doing it and hopefully will do so for many more years. It takes a lot of work to stay here, which is difficult. Last year was the best of my career and logically this year I’m not going to have it easy. I like to better myself, I’m facing a very important challenge and I think I am prepared".

Zidane
"He’s a winner and more than anything he’s given us all confidence. That is the most important thing for a player. He’s helped me a lot since he arrived and thanks to him I’m still living my dream of playing here". 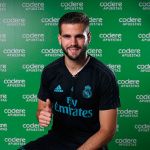