The Whites’ supporters were also photographed with Zidane and the players.
A big turn out from the Peña Madridista Windy City at The Peninsula hotel where the team are staying in Chicago. There they were received by President Florentino Pérez in an event also attended by Enrique Pérez and Gumersindo Santamaría, members of the board of directors, along with Emilio Butragueño, director of Institutional Relations. Florentino Pérez received warm wishes from those present and returned the gesture by signing autographs and having his photograph taken with the supporters, who also took a group photo with Raúl, along with the general director. The President gave the supporters club a Real Madrid shirt.

This supporters club was founded in 2013 and already has about 200 members. Its president, Álex Ruiz, said: "We were born as a group of friends and fans of Real Madrid. For us it’s been a pleasure to form a big community and to bring madridismo to Chicago whilst continuing to grow. It’s very exciting to have the team here. We communicate through social networks to meet up and watch the games at our headquarters".

Photos with squad
The members of the supporters club also had the opportunity to greet the squad at the hotel where the team is staying and had photographs taken with Zidane and with the players. 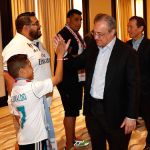