2
1
Real Madrid captured the 38th Santiago Bernabéu Trophy by Movistar as the Whites overcame Fiorentina in an encounter which commemorated the 60th anniversary of the club's second European Cup crown, which they claimed in this very stadium. All of the goals came during the opening period, with the third strike, from Cristiano Ronaldo, worthy of special mention.

Just four minutes had elapsed when Fiorentina got their noses in front, courtesy of Jordan Veretout's effort from the edge of the area. Real Madrid would have to come from behind and just three minutes later the Whites were level. Cristiano Ronaldo picked the ball up out wide and evaded the attention of his marker with a step-over and caught the visitors' backline out to cross for Borja Mayoral to tap home virtually on the goal-line.

Chances
Parity had been restored although the Italians came close to regaining their lead on 19' with an acrobatic effort from Davide Astori from a corner which cannoned back off the crossbar. Real Madrid hit back five minutes later, with the home side also posing a threat from a corner, only for Nacho's headed effort to fly narrowly over the top.

Cristiano Ronaldo pulled off a true work of art just around the half-hour mark. The Portuguese was ever reliable as he laid on the assist for the Whites' equalising goal with a typical moment of brilliance from the forward. He got hold of the ball on 33 minutes and looked for the perfect moment to release it, doing so as he struck the ball across the face of goal with both power and precision in equal measure.

Cristiano Ronaldo hits the post
Luca, Manu Hernando and Tejero came on for Casilla, Ramos and Nacho after the break, and the second half itself got off to a slow start. The most dangerous moment came in the 82nd minute. Isco fired in a shot from the edge of the box, but Dragowski was on hand with a fine save which fell to the feet of Cristiano Ronaldo, who saw his shot hit the post. Far from being overwhelmed, Real Madrid ended the game in the opposition's box. The Santiago Bernabéu trophy would stay at home for yet another year. 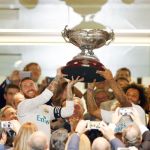