Borja Mayoral scored the Whites' goal that took the game to penalties in the last game before the UEFA Super Cup.
Soldier Field

1
Real Madrid beat the MLS all stars in their last preseason game. The Whites' won the MLS All-Star Game on penalties. Borja Mayoral scored the Whites' goal in the second half but Dom Dwyer towards the end. Zidane's side were better and had more opportunities on goal. Soldier Field, Chicago was the perfect host as the European champions played their final game before the start of the season.

Zidane stated that he would be making changes to the starting eleven. Only Navas, Ramos and Asensio stayed on from el Clásico. The madridistas dominated early on, moving the ball around and trying to get in down the wing. However, it took until the 20th minute for them to create real danger. In the space of just one minute, Isco, Lucas and Asensio all should have scored. Asensio had the best chance but it was saved by Howard.

Chances
As the break approached, the Whites' football was increasingly forward-focussed. Isco gave two good assists to Asensio and Ramos, who tried to chip the goalkeeper. Mayoral, Theo and Kroos also tired their luck with shots from outside the area. Despite opportunities, Zidane's team could not find a goal. Meanwhile, the stars of the MLS only troubled Real Madrid thanks to the link-up play between Kaka and Villa which Keylor Navas did well to stop. Giovinco also had an effort blocked.

Rubén Yáñez, Vallejo and Ceballos came on after the break and the game continued at break neck speed. Real Madrid played well and the MLS All-Stars had to wait to play on the counter. In the 59th minute, Real Madrid scored a deserved goal. Ceballos and Mayoral passed well between the lines and Mayoral was stronger in the one-on-one with the goalkeeper. Zidane continued with the changes, as Benzema and Bale came on the sharpen up the madridista attack. The Welshman hit the bar in the 68th minute.

Another key change was Luca, who made his first appearance in goal for the first team. Despite dominating, the Whites conceded in the 87th minute. Dom Dwyer scored a header after the ball was not properly cleared and the trophy would be won by way of penalties. After more than three weeks of work in the United States, the European Champions return to Soain with their focus on the UEFA Super Cup on Tuesday night. 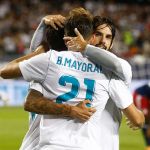