Goals from Bale, Casemiro and Kroos saw the champions pick up the first three points of the season against Deportivo.
Riazor

3
The league champions began the defence of their title with a good performance. The Whites beat Deportivo at Riazor, seeing them end the week as league leaders and putting the finishing touch to an exceptional week in which they defeated Barcelona four days earlier at the Bernabéu. Midway through the first half, and despite the fact that Keylor Navas came out on top in two one-on-ones with Andone in the 6th and 8th minutes respectively, the European and Spanish Super Cup champions began to make their mark on the game.

A shot from Modric from the edge of the area after 20 minutes was too much for Rubén and Benzema picked up the loose ball before setting up Bale, who tucked it away to open the scoring. Only seven minutes later the second goal came for the visitors. Isco switched play to pick out Marcelo who beat two defenders before setting up his compatriot Casemiro to make it 2-0 and take control of the game at Riazor.

The LaLiga champions went in at half-time firmly in the driving seat, only for the encounter to become a more open affair after the interval. Chances came and went at both ends and Deportivo came close to reducing the arrears on 59' when Andone headed the ball beyond Keylor Navas, only for Sergio Ramos to save the day by clearing the ball off the line. Shortly after the scoreline very nearly read 2-1 to the visitors, barely three minutes later it was 3-0 to the Whites. Gareth Bale collected the ball out wide and drove inside the area, cutting inside his man before spotting the run of Toni Kross and teeing the German up to sidefoot an effort on goal which struck Schär and flew beyond the helpless Rubén.

A second successive clean sheet
Deportivo, however, refused to give in and a Guilherme belter cannoned back off the bar on 64'. The visitors responded by twice coming close to adding to their advantage. After Luka Modric came a whisker away with an effort from the edge of the area on 78', Asensio's free-kick in the 86th minute drew the best out of Rubén. The Galicians had the chance to have cut the deficit on 89' but Keylor Navas was equal to Andone's spot-kick. In injury time, Ramos received his marching orders after being shown a second yellow. The defending LaLiga champions couldn't have hoped for a better start to the campaign, recording a second successive shutout in competitive games as they begin their title defence perched top of the pile. 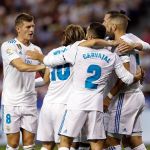