Real Madrid have drafted one of the most promising central defenders in the Spanish game into their first-team squad.
Jesús Vallejo (Zaragoza, 05-01-1997) will take his place in the Real Madrid first-team squad for the 2017/18 campaign. The defending Champions League and LaLiga holders have strengthened their ranks by drafting in one of the most promising defenders in Spanish football. A quick, no-nonsense centre-back, Vallejo also stands out on account of his character and personality, two qualities which saw him captain Real Zaragoza at the tender age of 18.

Originally signed by Real Madrid on 31 July 2015, Vallejo stayed on at the Aragonese club for the 2015/16 season. He then spent the 2016/17 campaign out on loan at Eintracht Frankfurt, where he racked up 25 Bundesliga appearances and played his part as the team reached the German Cup final. 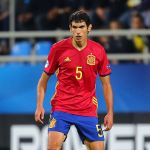