The twenty-year-old Seville-born central midfielder won player of the tournament at the U21 European Championships in June.
Dani Ceballos (Utrera, Sevilla, 07/08/1996) is now a Real Madrid player. The 20-year-old centre-midfielder joins the Whites from Real Betis following a spectacular U21 European Championship campaign in Poland in June, where he was picked as the player of the tournament.

Boasting sublime technical ability, Ceballos' standout characteristics are his ability to dictate the play and his deft passing range. With his signing, Real Madrid have captured one of LaLiga's skilful talents. Indeed, he completed the fourth most dribbles in the championship last season (80).

At just 20 years old, the man from Utera has already made 65 Primera División appearances for Betis, where he made his debut on the 26th of April 2014 at only 17. He played 31 times in the last campaign, scoring two goals and providing two assists. 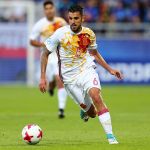