"You've proved that you've got more than enough quality, ambition and determination to play for Real Madrid", declared Florentino Pérez.
Theo Hernández was unveiled as a Real Madrid player at a ceremony which began with the screening of a video featuring his career highlights. This was followed by an address from Florentino Pérez, who welcomed the player to the club: "Congratulations because you're now a Real Madrid player and that owes to your talent and personality and all that you've shown despite your young years".

"First and foremost, you wanted to come here and defend this badge despite other big European clubs wanting to sign you. Your commitment and conviction is something that won't be forgotten by everyone at Real Madrid. You were one of the breakthrough stars of last season's LaLiga campaign and you've proved that you've got enough potential, quality, ambition, strength and determination to play for Real Madrid".

"These supporters will always be behind you because we're aware of your ability to fight in every game and just how keen you are to win. You're joining a club that has won 12 European Cups and you become a part of the history of the biggest club in the game. I know that you'll give your all for this badge and for your family".

Ambition
"You did everything in your power to be here and pulling this shirt on. We're certain that you'll go on to lift many pieces of silverware during your time here. Today you're here where you wanted to be and a marvellous experience as a Real Madrid player awaits you. I want to give you a heartfelt thanks for wanting to share in our fans' dreams alongside all the rest of us as we continue to make history all together". 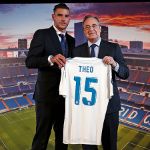