The players singed autographs and took photos with fans at the Hard Rock Stadium.
Miami is abuzz with el Clásico and the presence of Real Madrid. Since arriving, the European champions have witnessed the passion of the fans here in the U.S city. It was shown again during the training session at the Hard Rock Stadium, where thousands of fans turned up to watch from the stands.

Before training, the players repaid the fans' loyalty, signing autographs. Later, whilst out on the pitch the fans continued to sign and cheer their idols on from the stands. It was another show of the passion of madridismo throughout the world. 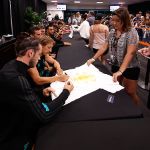