Zinedine Zidane's charges put through double session combining fitness and ball work.
The Champions League and LaLiga winners are back and into work, as the Whites completed their first day of training in their pre-season camp in Los Angeles. The 26 players who travelled from Madrid got a feel for the UCLA campus facilities, where they will train during the first part of the tour. Theo Hernández took part in his first session as a madridista, whilst the eight youth-team players drafted in by Zidane also completed the work-out.
​
Ball work was the focus in the afternoon session. The players performed different skill exercises, before splitting into two teams to practice possession and pressure. Meanwhile, the four goalkeepers trained separately. The team continued practicing possession with the goalkeepers later joining the group. The session ended with stretching.

Fitness and ball work in the first session
The morning session was split into two parts. Firstly, the players carried out some fitness work with Antonio Pintus, featuring a circuit involving stretching and abdominal exercises, which was followed by running drills. Next up, the ball took centre stage as the players completed various skill, control and passing and rondo drills. 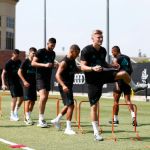