"Real Madrid is in my heart, it's incredible to see the team here", declared the chairman of the supporters' group, Javier Robledo.
Members of the Peña Madridista Sur de California supporters' group visited the UCLA campus to watch Zinedine Zidane's side train. The members of the fan group were welcomed by Real Madrid president, Florentino Pérez, who posed for photos with the followers and signed autographs. During the course of the get-together, the two institutions exchanged gifts. Meanwhile, the representatives from the supporters' club also got the chance to greet the club's director of institutional relations, Emilio Butragueño and Raúl.

This fan group, which was founded in 2012, boasts almost 100 members. The group's president, Javier Robledo, offered his impressions after having seen his idols: "Real Madrid is in my heart, it's incredible to see the team here. Many thanks to the president for hosting us. We'll be cheering the team on from start to finish in tomorrow's game". 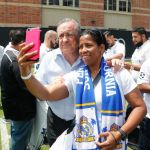