The Real Madrid president, who was joined by Emilio Butragueño, signed autographs and posed for photos with the madridistas.
A healthy number of members from the Peña Madridista San Francisco Bay Area today descended on the Santa Clara Marriott Hotel, which is where the team are staying prior to their clash against Manchester United. The members of the supporters' group were welcomed by president Florentino Pérez and the club's director of institutional relations, Emilio Butragueño. The get-together saw representatives from the two institutions exchange gifts.

In addition, Florentino Pérez signed autographs and posed for photos with fans. The chairman of the supporters' group, Kenneth Jamora, enthused: "It's fantastic to have Real Madrid here and to be able to see the best team in the world. My thanks go to Florentino Pérez and everyone at the club. Our peña's slogan is 'I left my heart in the Bernabéu’. Hala Madrid!" This fan group was founded in 2016 and currently boasts nearly 100 members. 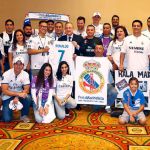