Real Madrid were unable to claim victory in an encounter that was full of chances and which saw Kovacic and Asensio net for the Whites.
Hard Rock Stadium (Miami)

3
The Miami El Clásico proved to be a pulsating spectacle in every sense of the term. Firstly, in the stands, where those in attendance revelled in the action and were treated to a pre-match show and a half-time performance from Marc Anthony. Meanwhile, the on-field proceedings most certainly didn't disappoint, as the two sides served up some scintillating attacking play which resulted in a glut of goalscoring chances. Real Madrid, who fashioned countless openings, ultimately failed to claim victory in this, their third outing of the pre-season campaign. Mateo Kovacic and Marco Asensio were on target for the Whites in an encounter in which goals from Lionel Messi, Ivan Rakitić and Gerard Piqué handed Barcelona victory.

The two coaches were clearly keen to do their bit to ensure that the clash lived up to its billing, with both fielding very strong line-ups. The return of Sergio Ramos, who was making his first appearance of pre-season, represented the major piece of team news for the madridistas. It was during the opening exchanges that this game looked very much like being an uphill struggle for the Whites. The Azulgranas' first sight of goal saw Lionel Messi beak the deadlock, with his shot deflecting in off Raphaël Varane. Just a few minutes later, Rakitić  doubled Barcelona's advantage when he arrived late in the box to rifle the ball home. Madrid would have to hit back and they duly did so through Kovacic. The Croatian midfielder reduced the arrears with a powerful effort from the edge of the area that snuck just inside the post. With just 15 minutes on the clock, those inside the Hard Rock Stadium had already been treated to a trio of goals.

Fine Asensio finish
The game was proving to be a rather topsy-turvy affair, with both sides trading chances. Karim Benzema came close to restoring parity on 19' but he dragged his effort just wide of the post. Next to try his luck was Luka Modric, whose effort sailed over the bar. Meanwhile, Neymar and Messi both had chances in quick succession, with the Argentine expertly denied by Keylor Navas. With such a flurry of chances at both ends it was surely just a matter of time before the next goal would come and it was the madridistas who got it to make it 2-2. Madrid staged a textbook counter-attack following a Barcelona corner and Kovacic and Asensio  combined for the latter to slam the ball past Jasper Cillessen.

Following a first half featuring very little action in the middle third, a hatful of chances and a party atmosphere in the stands, the second period began with four changes in the Madrid ranks, with Nacho, Jesús Vallejo, Isco and Lucas all entering the fray. With 50 minutes played, Piqué met a Neymar free-kick to restore Barcelona's lead. The second half followed the same script as the opening period and in the space of just 15 minutes, the two teams had each threatened four times. Madrid's clearest chance fell to Isco, who was thwarted by Cillessen. Meanwhile, Navas and Kovacic came to Madrid's rescue to prevent Luis Suárez and Samuel Umtiti from extending Barcelona's lead.

This is how things continued as the minutes ticked by and the two sides served up some eye-catching football in which the attacks were enjoying the upper hand. Amongst these chances both sides made a series of changes. In the dying stages, Isco and Dani Ceballos both came close to making it 3-3, but ultimately no further goals were forthcoming. This game was Zinedine Zidane's side's last in the International Champions Cup and the team's next outing is against the MLS All-Stars team in Chicago in what will be the final test before the UEFA Super Cup. 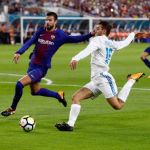