Team and fans enjoyed the historical Champions League won in Cardiff at Cibeles and the Santiago Bernabéu.
A party on par with the team’s achievements. A day after winning la Duodécima in Cardiff, Real Madrid held a spectacular celebration that demonstrated the connection between the team and their fans. The fountain at Cibeles and the Santiago Bernabéu Stadium were the two meeting points and where the most emotional scenes were lived. Songs, hugs, speeches, photographs...An endless number of images and memories that will remain forever in the memory of the madridistas.

From early afternoon the streets of Madrid were painted white. A tide of madridistas crowded the centre of the capital to welcome home their idols. The players began to see the scale of what they were going to experience when they presented the cup to the institutions. From the balcony of the Town Hall, the image was impressive. Thousands of madridistas waited for the arrival of the Champions’ bus in a spectacular party atmosphere.

The team made their entrance at Cibeles to shout of "champions, champions". The party was tremendous and the players didn’t put down their mobiles as they wanted to capture what they were experiencing. But it was time to carry out the traditions. And the first two captains, Ramos and Marcelo, were in charge of presenting the European Cup to all of madridismo from the top of Cibeles. After dressing the goddess with the Real Madrid scarf and flag, the Whites went to the stadium.

At the Bernabéu the climax of the celebrations was waiting. With the stands packed, and under an impressive montage of light and sound, the heroes of the Champions League appeared one by one on to the field.

Historical double
Marcelo came out with the league trophy and Sergio Ramos with la Duodécima. The fans applauded the squad while they lifted the trophies to the Madrid sky. Everyone was involved in the party and were aware that they had made history this season. The fireworks, with We are the Champions playing in the background and the team photos set the tone for an unforgettable day for Real Madrid. 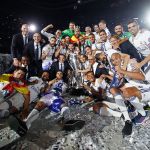 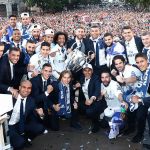