President Florentino Pérez took the trophy to the 'Kings of Europe' room.
La Duodécima trophy can already be seen on the Bernabéu Tour. President Florentino Pérez took the trophy won in the Cardiff final to be alongside the other eleven European Cups in the trophy cabinet in the Kings of Europe room. After Real Madrid became the first team to win two consecutive Champions Leagues, fans can now enjoy this trophy and photograph themselves with the 12 European Cups.

The room that houses these titles is a unique and striking space, with a light show, sound and a shower of confetti that excites all madridistas. Opposite the trophy cabinet with the 12 European Cups, there is an 18 meter screen with an audiovisual installation that has an clever game to discover some commemorative objects and review the twelve titles. 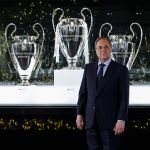